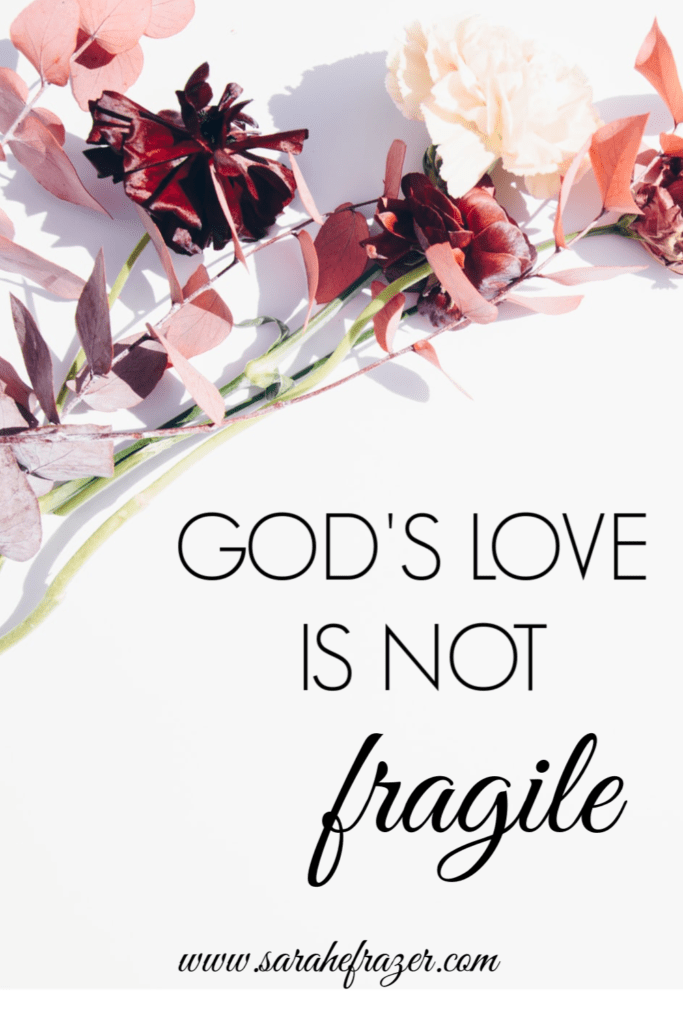 God’s Love Is Not Fragile: A Free Audio Devotional

I sat in the movie theater with my daughters and watched the two sisters save their city. The autumn air turned cold with icy winds, but the love for each other and others rose to put out the winter. At the end, one of the characters told a sister, “My love isn’t fragile.” She had run off and left him behind. Instead of feeling left out, alone, or abandoned, he responded with truth. Love shouldn’t be fragile. True love is not easily broken or like a piece of ice. It doesn’t melt in the fires of fear or loneliness.

And I wiped a tear from my eyes as I realized His love isn’t fragile. God’s love. Spending this past fall reading the first seven books of the Old Testament I’ve seen the big picture. The big picture is God’s love is holy and strong and deep. It is not fragile.

The ache of this life, however deep, will never break His love. Always. Forever. Do you believe this? We cannot reach this love, this unconditional, unbreakable love and it often comes “out of the wrecked life” as Oswald Chambers says. 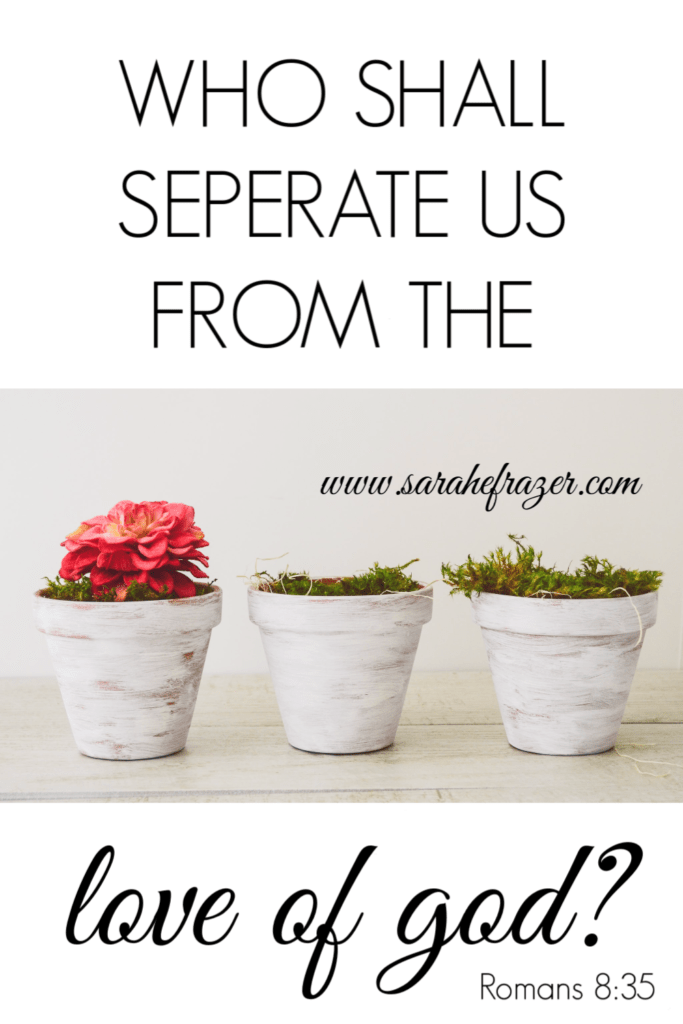 “Either Jesus Christ is a deceiver and Paul is deluded, or some extraordinary thing happens to a man who holds on to the love of God when the odds are all against God’s character. Logic is silenced in the face of every one of these things. Only one thing can account for it — the love of God in Christ Jesus. “Out of the wreck I rise” every time.”

You see, when a ship wrecks, there are pieces that are broken, but occasionally you might find where something is left whole. Look at your life. Does it look like a shipwreck? Paul would say: look for the love. It is not broken. It cannot be. God’s love for you remains.

How could God allow (or cause) such things to happen if He loved us? He only knows. And Romans 8:38 says, “All things work together for good.”  God can and will use even the hardest of things for our good.

God’s love isn’t fragile.
Powered By the Tweet This Plugin

My answer might be tough, but in the spaces of those words is the truth that comforts. Let it comfort you. God has not abandoned you or left you to pick up the pieces of your life alone. You may feel ship wrecked, but you are loved.

How do we know we are loved? 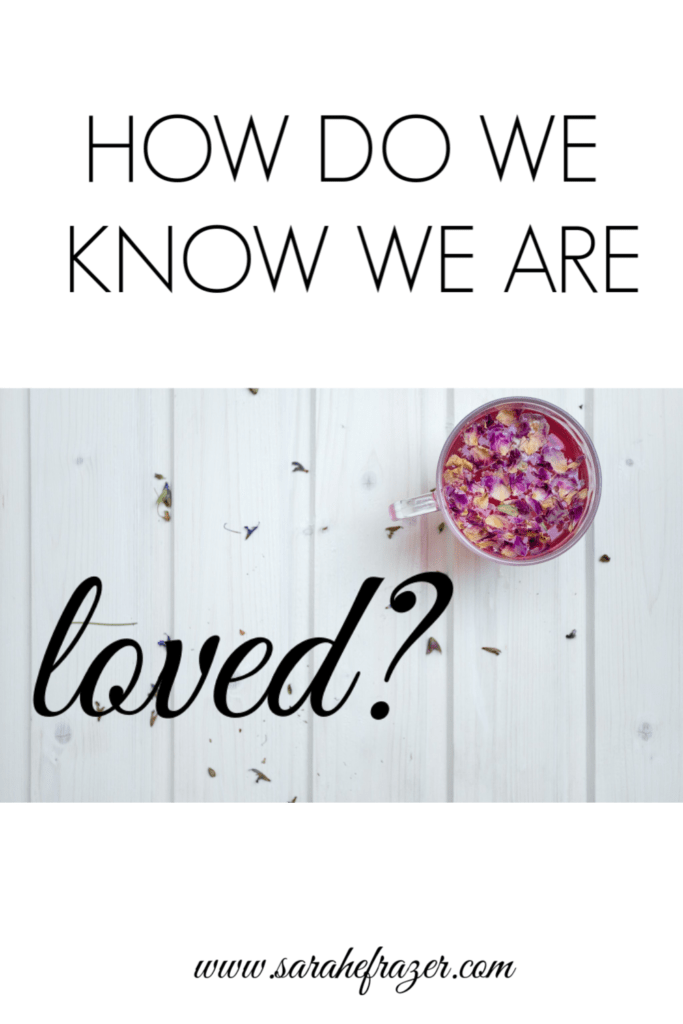 So they could know, however far they ran, however well they hid, however lost they were—it wouldn’t matter. Because God’s children could never run too far, or be too lost, for God to find them.  – Sally Lloyd-Jones, The Story of God’s Love for You

Let me tell you story of a father and a son. A father’s son ran away. Before he ran, he made sure to insult; maybe he yelled. He left in anger and with a sense of entitlement. He left on his own and by his own choice. No matter what caused the young man to turn his back on his father, he did. I suspect it had something to do with a void—a deep sense of longing in his heart for something…something more than he had. And he began trying to fill that emptiness. Maybe he tried friends. Or food. Or fun.

However he did it, he found himself emptier then before and in a place of disgust and dishonor. In the middle of a pig pen, eating garbage, he reached the end of his destitution. So the son began to walk home. Only a spark of hope and a dash of humility kept his feet moving forward. Maybe his heart practiced the speech. Maybe his lips quivered in fear and hurt. His eyes surely watered as he expected the justifiable rejection waiting at the end of the road. Humility was his companion during the walk home.

Before the son could reach the utter place of humiliation, the father ran to him. Every day the father had been watching for him. Never giving up hope. Never losing an ounce of love for his way-ward son. The father didn’t care about the past. The father cared only that his son had returned. The father ran up and hugged his son. The son who had shunned him, hated him, insulted him, and left him—this was the son the father embraced. The depth of the son’s humility is directly related to the depth of the father’s love. (Taken from Luke 15:11–32)

Daily living begins here…with love. Daily living is in the truth of this old song I sing to my little ones every night.

Jesus loves me, this I know, for the Bible tells me so.

You can listen here. 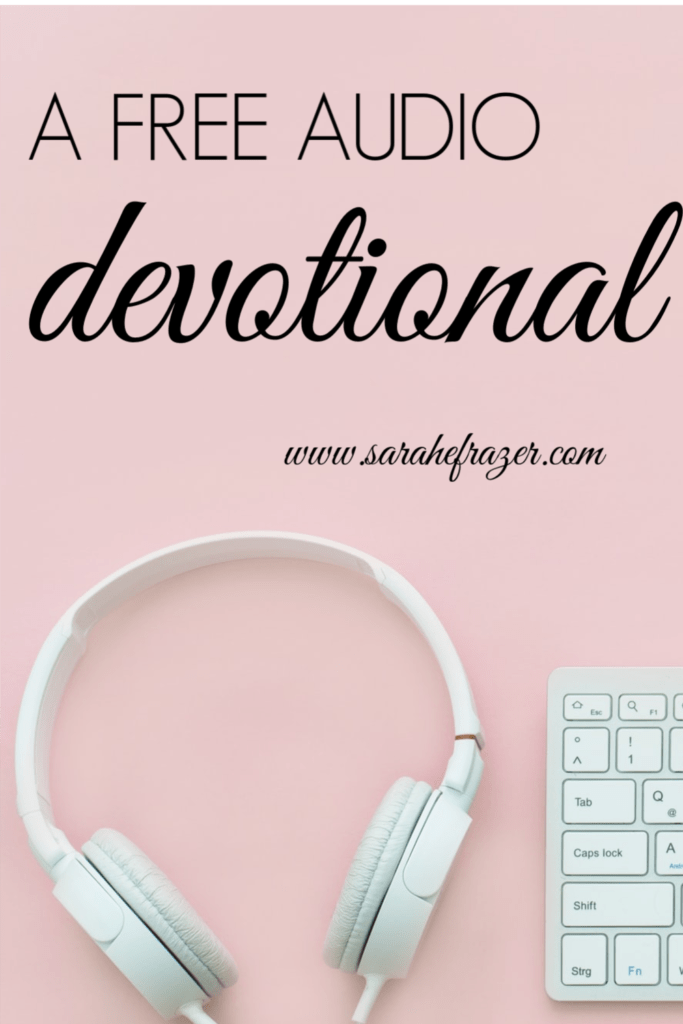