Monday was such an amazing day! I don’t get to say that often, but my Monday the other day was so productive! Sure, we had our usual meltdowns, but I was able to get so many things accomplished!

I don’t know what it is about Mondays, but I am the most productive on Mondays then any other day of the week.

Then, Tuesday rolled around, like it always does. BAM! School went horrible. Tears and screaming over toys. Crying over falling down. Over nothing. Over everything. Breakfast came from a toaster. Lunch was sandwiches (again). I felt like such a failure. The dishes were piled in the sink, and the dishwasher was full of the dishes from yesterday. Our big “outing” that day was going to the bank. Drive-thru, so I didn’t have to actually have to change out of my yoga pants.  It all seemed so small and insignificant. Tuesday.

As nap time rolled around that Tuesday, I opened my SheReadsTruth app and read the devotional I was three days behind in reading.

Similarly, Ruth’s simple and consistent acts of faithfulness have Kingdom-size ramifications. And have you noticed she was not some long-time, uber-religious believer who earned a spot in the God-story, even the lineage of Christ? Far from it. She was just a young woman doing hard things because she believed it was what she was called to do. We don’t hear this in her words, but we see it in her actions. Her faithfulness is not bright and shiny, her work not award winning or perfectly planned. She is simply following God’s lead, taking the next right step. 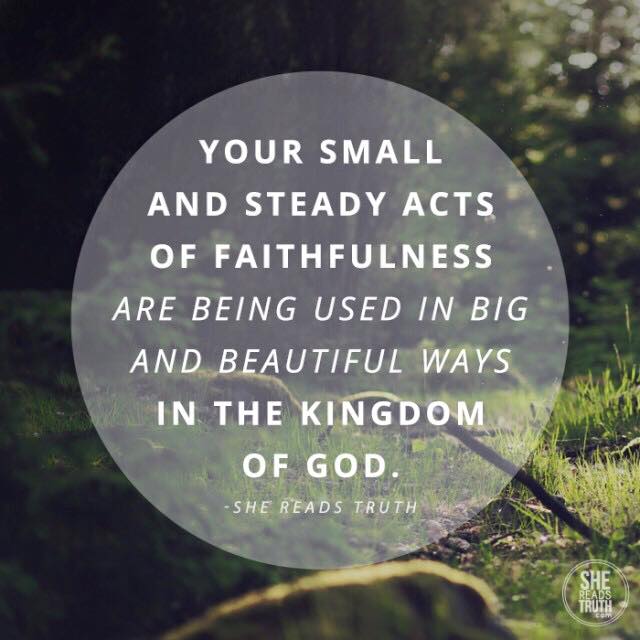 Did Ruth know how her Tuesday was going to go? Did she see her simple act of just going to work would change the course of her life, her mother-in-law’s life, and her very place in the linage of the Christ?
Most of my days are filled with small things.  Most of my days seem more like my Tuesdays then Mondays. I see my acts of faith as very tiny indeed.  Who sees me clean up poop everyday after nine months of attempting to potty train?Who sees me when I’m frazzled at 4:00pm because NO ONE NAPPED? Who sees me folding the sixth load of laundry? Who sees me wipe the table, for the hundredth time that day?
Who sees me serve my children, work from morning until night “on call,” barely crawl into bed, to wake up to it it again?
After Boaz tells Ruth to only glean in his fields, so he can watch over her, she asks him: “Why?”
His response:

“It has been fully reported to me, all that you have done for your mother-in-law since the death of your husband, and how you have left your father and your mother and the land of your birth, and have come to a people whom you did not know before. The Lord repay your work, and a full reward be given you by the Lord God of Israel, under whose wings you have come for refuge.”

The Lord is why.  Who saw her rising early and joining the other outcast women of the city? Who saw her wipe the sweat from her face after the hard labor each day? Who saw her kindness to her bitter mother-in-law? God saw. He saw that she didn’t do it all to be noticed.  She didn’t do it to feel good.  She did it because…..it needed done.
How did she do it? How did she do the small acts of faithfulness day after day? Read verse 12 again: The Lord repay your work, and a full reward be given you by the Lord God of Israel, under whose wings you have come for refuge. Ruth was able to do all of those small acts in faithfulness because she had found refuge under the wings of the God of Israel.

Psalm 17:8 – Keep me as the apple of Your eye; Hide me under the shadow of Your wings.

Psalm 36:7 – How precious is Your lovingkindness, O God! Therefore the children of men put their trust under the shadow of Your wings.

Psalm 57:1 – Be merciful to me, O God, be merciful to me! For my soul trusts in You; And in the shadow of Your wings I will make my refuge, Until these calamities have passed by.

Psalm 91:4 – He shall cover you with His feathers, And under His wings you shall take refuge; His truth shall be your shield and buckler.

Keep going momma, your small acts of kindness matter. Yes, we all know the ordinary is extraordinary. Keep going, but only if you are resting in the shadow of His wings. Only if you are devoting time and energy into your relationship with God. Keep changing those diapers. Keep the smile when you just want to throw in the towel and scream back at them. Keep filling your coffee cup, but fill your soul with His Truth.

You can do those small acts of faithfulness only if you find your strength and refuge in the God of Israel. 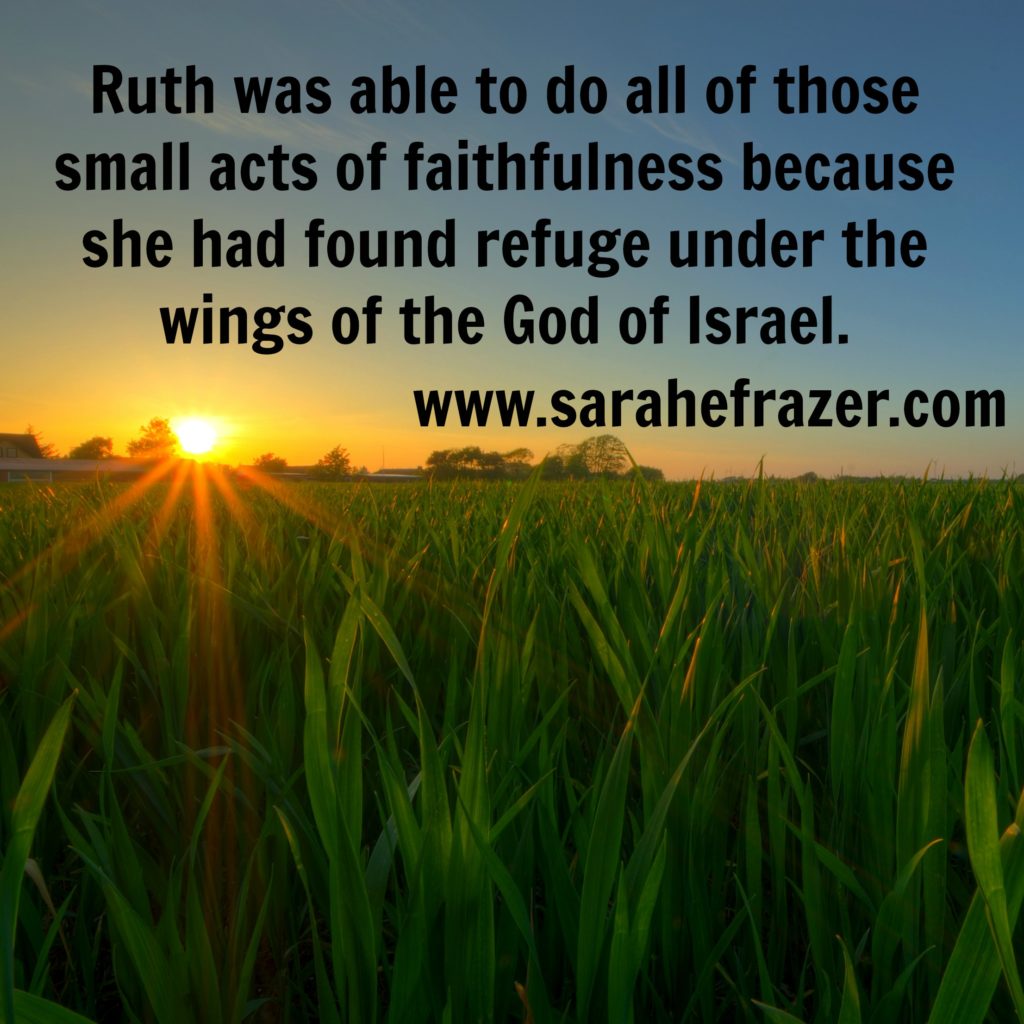 ~~~~~~~~~
It’s time for Tuesday, for “Tuesday Talk!” Link-up your favorite post! If you do, grab the button on the side and add it to your post (not a “link’s page”).  Please add it to the specific post you are linking up! Thanks. 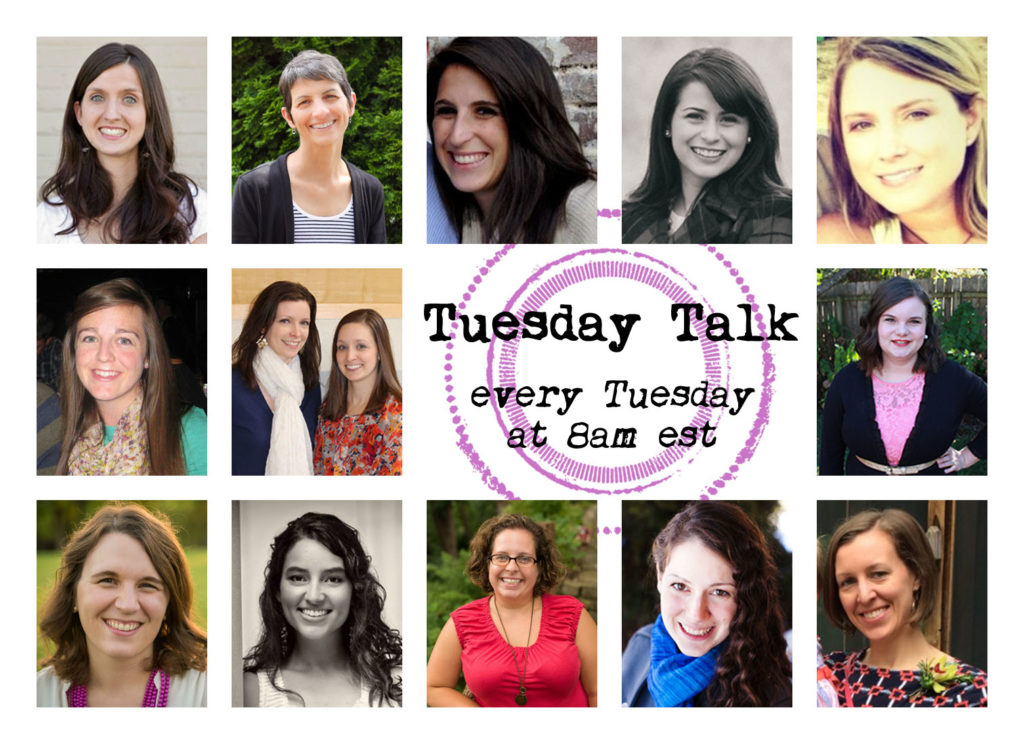 Also, check back on Thursdays for Adoption Stories.